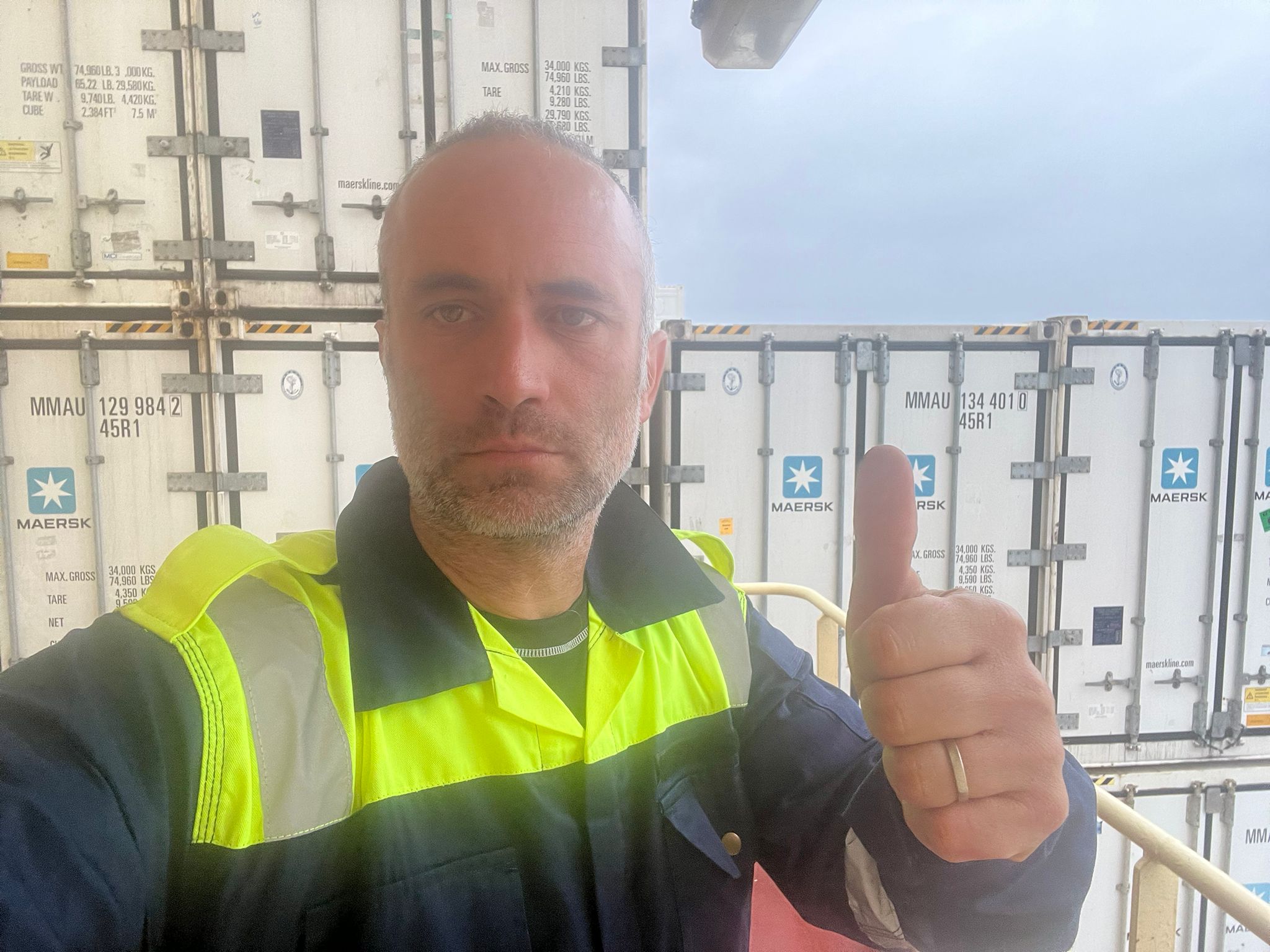 Fabrice was forced to abandon his boat, which promptly sank offshore of the Portuguese coast. The rescue services were immediately triggered into action. Alerted by Race Management, the Portuguese MRCC contacted the vessels in the vicinity of the accident. Located close by, the cargo ship M/V MAERSK BRANI was diverted and the rescue operation was successful at 14:32 UTC this afternoon. Fabrice is safe aboard the cargo ship. He is not injured. He will disembark in the harbour town of Ponta Delgada, on the south side of the island of São Miguel, in the Azores archipelago. 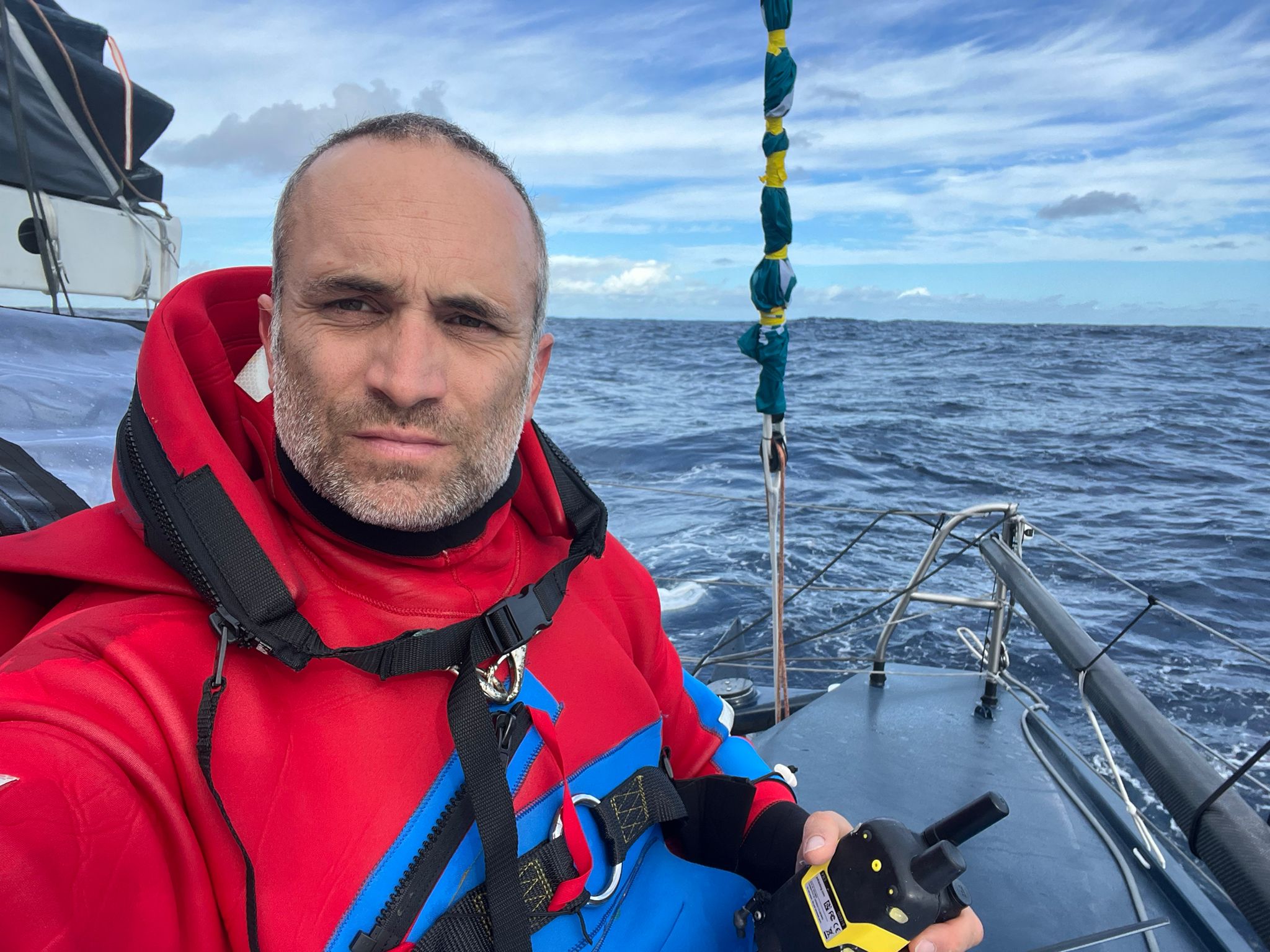 n”Hello everyone. I’m safe and sound aboard a cargo ship, the M/V MAERSK BRIDA, which will drop me off in the Azores tomorrow morning. My Imoca NEXANS – Art et Fenêtres went up in flames and sank in front of me. All my dreams have been swallowed up with her”.

Monday morning: all’s well aboard and I’m having a fantastic race. The boat is powering along in flight mode in the squalls and heavy seas. Suddenly, I realise that one of my ballast tanks has broken apart on the back of a wave and I’ve got several hundred litres of water in the boat. I bring the boat to a standstill to be safe and I begin to empty it all out. At that point, with the batteries flooded, there’s a complete black-out aboard. I no longer have any electricity: no autopilot, no computer, no electronics. In consultation with my team, I decide to carefully make for Cascais.

Sunday afternoon: lots of smoke aboard the boat. I discharge the fire extinguisher, pull on my TPS (survival suit) and alert Race Management, who request other Imoca competitors to divert and offer assistance if need be. The smoke ends up clearing. I decide to continue on my way to Cascais. I cross tacks with James Harayda, the skipper of Gentoo, who’d come to my location to offer assistance. I thank him and get back on my way. I completely dry out the boat and prepare myself for a tough sea passage. I sleep for two hours that evening to recover from my emotions and then I helm for 6 hours overnight.

I have another 2hr30 of sleep and then helm for 7 hours. Shortly after 12:30 hours, there’s more smoke aboard. Followed by an explosion. I return to the cabin and fumble around until I locate my TPS. My grab bag had remained in the cockpit. I return to look for my wedding ring. I discharge the fire extinguisher, but nothing works. The smoke isn’t white like yesterday, rather it’s yellow. The cockpit buckles and turns yellow. The sea spray makes the sound of water on a hot pan. I understand that I’m going to have to evacuate. I warn my team of a possible evacuation. As I hang up, I’m at the back of the boat by now, ready to go into survival mode: flames stream out of the cabin and the cuddy. I’m in the midst of the flames. I can’t even open my eyes. I manage to push the life raft into the water and jump. Normally, the line that attaches the life raft to the boat is supposed to release. It doesn’t release. The boat, which I’ve had the time to bring hove to, but it is still moving forward pushed along by heavy seas, pulls the life raft with it and the latter fills with water. I manage to climb aboard without letting it go. I think that’s where my fate was decided and things take a turn for the better. I say to myself “if you want to live, you have a matter of seconds to find the knife and cut it away”. The Imoca is pulling me with her. The waves are bringing me back towards her in a perilous situation. I finally locate the knife and cut. My life raft drifts downwind of the Imoca, which is on fire. She takes 30 minutes to sink. I speak to her and thank her. We were supposed to circumnavigate the world together in two years’ time.

Afterwards, I have to get myself organised. The satellite phone didn’t like the water in the life raft and doesn’t work. I tell myself: “nobody knows that the boat’s sunk and you’re in your life raft. If you turn off the beacon from your Imoca, which you’ve been able to bring with you, and you trigger the one in the life raft, they’ll have the info.” That’s what I do. I can’t find a bailer aboard. Some Tupperware with batteries inside will save me. I empty the water from the life raft. The wait begins. I position myself at the back of the life raft so it doesn’t overturn. The seas are very, very heavy. I go over all the gear I’ve got aboard and prepare myself for what comes next. I gather together the flares. I put the VHF around my neck. I spend three to four hours in the life raft. I feel surprisingly calm. Level with the water. The life raft regularly fills with the water from the waves, which are occasionally breaking onto us. I’m bailing it out, but I feel safe. And yet I know that I’m not out of the woods yet.

Every 30 minutes, to save the batteries, I make a Mayday call via VHF. I was able to have the boat’s VHF with me thanks to Éric, my team manager, who had the time to offer me some advice just before I hung up. I keep the batteries from the one in the life raft for future use.

After quite a while, a voice responds. A cargo ship which is 6 miles from my position is about to arrive on the scene. I feel reassured, but I can’t see how I’ll be able to climb aboard such a giant in these seas. I’m in permanent contact via VHF with the captain, who can’t see me: the seas are heavy, he’s got the sun in his eyes and I’m a miniscule orange dot. He tells me later: “you are alive because you told me: I am approximatively 2 miles from your starboard side”. I set off a distress flare. He sees me. He loses sight of me. I set off a second one. He sees me and arrives on the scene. He makes his first attempt at approaching me, but fails. It’s really overwhelming to be in an inflatable life raft just metres from this steel giant. He apologises via VHF and makes another approach. As he passes by, the sea becomes choppy, the life raft flooding. He repositions himself to windward of me, just metres away, it’s crazy, and drifts towards me. This big hulk calms the seas a little and draws me up. The life raft rubs against the hull from forward to aft. If this doesn’t work, things are going to get complicated. The crew toss me some lines, which I don’t manage to pick up at first.

Finally, I manage it. I get hold of one close to the bow of the vessel. It’s on a knife edge. There’s precious little separating success and failure, survival and catastrophe. The crew pulls me towards the steps, which have been lowered into position. With the waves, I sometimes manage to get level with the steps and then I drop 5 metres below them. It’s the final ordeal. If the life raft passes under the steps, it will be punctured and I’ll be spat out into the water. I’m approaching. The first time: it doesn’t feel right. A second wave, I go up and hup, I jump onto the steps which I’m just able to reach, and then I find myself in the arms of a man wearing a helmet. I climb up on deck.

I’m welcomed by around twenty crewmen. It’s a crazy moment. They hug me and congratulate me. Before I’ve had time to breathe a sigh of relief, they take me into a cabin and I remove my survival suit. “But you’re dry!” they exclaim with surprise. Yes, yes, we’re well equipped on our race boats! I take a shower and put on one of the crew’s outfits.

It’s only once I’m aboard the cargo ship that the fear and adrenalin surge. My legs are shaking. It’s crazy this animal-like capacity Man has to deal with a survival situation. And then it drops away again. Death didn’t want me today, or rather life didn’t want me to leave it. I’m devastated but also the happiest of men, because this evening my wife and my daughters won’t go to bed crying.

When I come out of the shower, I am greeted by the captain and his second in command. We wrap our arms around one another. They tell me that their legs are shaking too.

This experience has done nothing to dent my passion for my profession and for the ocean.

I thank my team, Race Management for the Route du Rhum – Destination Guadeloupe and the rescue teams, whose work ensured that this rescue operation went as smoothly as possible.